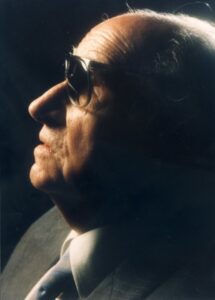 Joaquín Rodrigo’s Concierto de Aranjuez for guitar and orchestra will be a respite between a hectic gallop in the Shostakovich Festive Overture and the overpoweringly dramatic Symphony No.  9 of Beethoven for the Southern Arizona Symphony Orchestra’s season finale.

Rodrigo (1901–99) was born in Sagunto, Spain and at age 3 lost most of his vision due to diphtheria. He started piano and violin at age 8 and harmony and composition at 16. He championed the Spanish guitar as a classical instrument, although he never became proficient on it. His composing was accomplished using Braille. He studied in Spain and Paris, won Spain’s National Prize for Orchestra in 1943 for Five Children’s Pieces, and held the Manuel de Falla Chair as professor of music at Madrid University.

His compositions include 10 for orchestra, four for symphonic wind bands, and 14 concertos, including works for guitar, cello, flute, harp, and piano. His most popular work is the Concierto de Aranjuez, which was inspired by the gardens at Royal Palace of Aranjuez. The first movement, Allegro con spirito, has two themes, and is very animated with rhythmic vitality. The second movement is a slow Adagio with the solo guitar sharing passages with English horn, bassoon, oboe and horn. This music is lush with tranquility, but there are several climatic injections; it has been widely adapted by jazz artists. The third movement, Allegro gentile, has a dance feel and is in both 2/4 and 3/4 time.

The soloist will be guitarist Roberto Capocchi, a native of Brazil. He is a graduate of Lins de Vascocelios  Conservatory and Carlos Gomes College, both in Brazil, with a Master of Music in performance at University of Arizona; he is a doctoral candidate at the UA. He is on the faculty at New Mexico Highlands University, United World College, and Adams State University. He tours widely in both North and South America.

There will be three performances of this concert: Saturday, May 10 at 7:30 p.m. at the DesertView Performing Arts Auditorium in SaddleBrooke; Sunday, May 11 at 3 p.m. at St. Andrew’s Presbyterian Church in northwest Tucson; and Monday, May 12 at 7:30 p.m. at the Pima Community College West Campus Proscenium Theatre, 2202 W. Anklam Road.